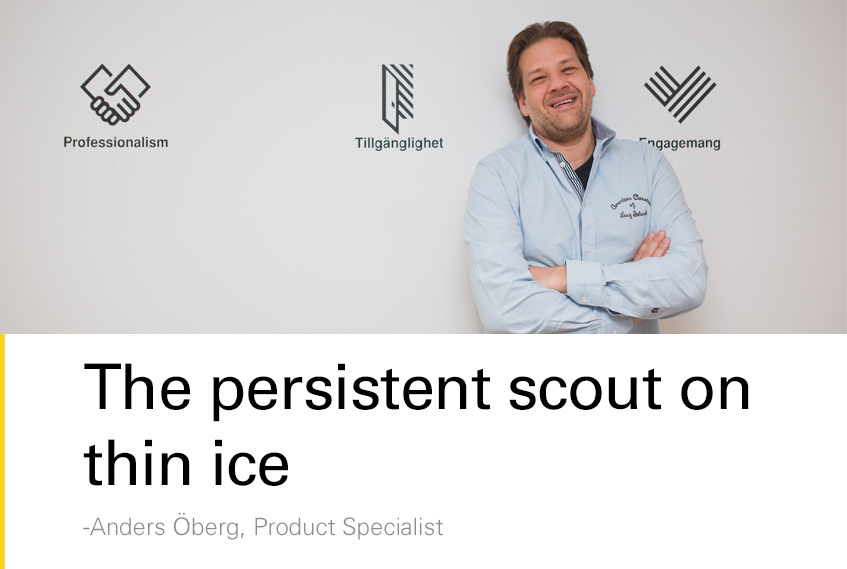 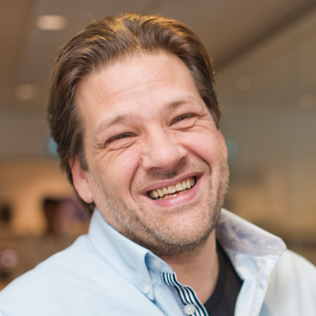 Facts “- You need those who stand furthest out and say Maybe we should go that way!”

Managers have come and gone, but Anders Öberg has persisted. Since 1987, he has collected a wealth of experience with system administration that is difficult to match. Today, Anders works as Product Specialist at Crosskey. He has also learned how a monster on two wheels should be handled.

To begin with, Anders Öberg is a little difficult to figure out. He combines a schoolboy-like shyness with the calm self-assurance only possessed by those with many years of experience. He also has a hint of subtle humour.

But let's begin by travelling to Huddinge, south of Stockholm, where Anders was born in 1965.

- Growing up in Huddinge in the 1970s was nothing special. It was immediately after the flower-power era and just before the dynamic 1980s. It was Kiss, Sweet and Abba.

Speaking of music, Anders notes that he missed two great events in the history of Swedish music:

- All the punk rock gigs, e.g. Ebba Grön, came from Rågsved, a stone's throw from Huddinge. And I also missed Bob Marley's gigs at Gröna Lund. On the other hand, I saw David Bowie in Gothenburg in 1986, and I’m really glad I did that!

Something that Anders didn't miss out on was scouting. At the age of 11 he joined the Segeltorps scout troop. It was the beginning of a commitment that lasted until Anders was nearly 30 years of age and had children of his own.

- Scouting teaches you a lot of good basic values, ranging from respect for animals and nature, to equal opportunity and the fact that there should be room for everyone. Together we can achieve great things. I think that scouting is a very good way for people to develop, both as individuals and for the society in general.

In time, Anders became a scout leader and during his last years in the movement he was engaged in rover scouting for young adults. An insight that Anders gained from scouting is that Everyone can.

- In an exercise, some participants throw themselves into the task immediately and have no barriers at all, while others stand on the side-line and watch, but are still included. And then you have a third type, who stand by and have no intention of becoming involved at all, because e.g. he/she has low self-esteem and thinks I probably cannot. But they can!

- And if everyone thinks identically, they may end up all running in the same direction, and perhaps in the wrong direction. You need those who stand furthest out and say Maybe we should go that way! But that person may find it difficult to be heard. As a leader, it is your job to get the group dynamic to work, so that everyone can participate and contribute their knowledge and ideas. 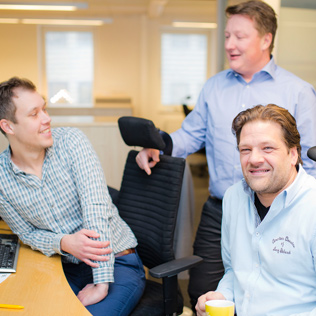 Anders studied on the 4-year technical programme at Åsö upper secondary school in Södermalm. During a winter break, he jumped in and helped out at Merchant Fondkommission, where his sister worked. He also spent a number of months working in the back office before finding a technical job. However, Anders was recalled to Merchant in 1987.

- They needed a technical department. They had a mainframe computer standing there and someone had to take care of it. That was me. CEOs and company names have been changed. Merchant became Aragon, which became JP Nordiska, which was bought by Icelanders and became Kaupthing, until the Åland era began. So it feels like I've changed jobs 5-6 times.

Anders describes the Icelandic period as an interesting time.

“- That's probably what happens when you live on top of a volcano."

- They were extremely visionary and dynamic. They planned to take over the world in a very short period of time and so they needed system support. That required very rapid changes. They bought up companies in different countries and the intention was that they would then be integrated into the same IT systems. They therefore launched a process of intense consolidation and conversion. They needed firm Icelandic hands at the top. And they were highly motivated. But that's probably what happens when you live on top of a volcano.

Then the Icelanders said goodbye and the Ålanders came knocking.

- It's impressive that Åland has created an IT company for the banking and securities market and then succeeded in building up something outside Åland. Crosskey has great future potential. There are both small and large banks that depend on old IT systems and will have to replace them someday. These banks have huge costs and they may even need to look for retired COBOL programmers, because they are the only ones who are able to fix their systems. Newcomers like Crosskey can offer them alternative solutions that are much smoother.

An example of this is Crosskey's share trading system Ming, which Anders has worked on. He is happy to reveal the secret behind Ming:

- Ming became a streamlined and useful product because everyone who planned Ming had many years of experience, but with different approaches. In addition, we built Ming in collaboration with the client, i.e. the brokers at Ålandsbanken.

Anders is still worried about a trend, where the system buyers expect a changeover to happen from one day to the next. At the same time, the number of staff expected to manage the new systems has often been slimmed down.

- The client may have rationalised intensely and don’t prioritize training. But you need to practice and work your way into the new systems. When you have to learn something new, you have to sit in a quiet environment and absorb everything. 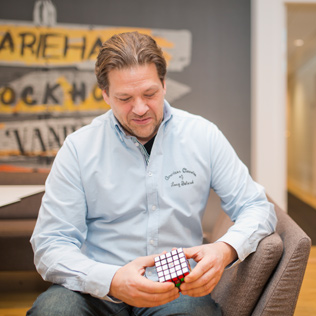 A friend to wrestle with

We are nearing the end of the conversation when Anders takes out his mobile phone and shows me an image. It represents a cult monster on two wheels: a nice Yamaha V-max motorcycle. It was built in 1984 as a concept model ahead of an exhibition.

- The various departments were allowed to do what they wanted and then they put together the bike without consulting very much with each other. It was never intended to be put into production. Those who built the engine really over did it, and so did those who were responsible for the overall design. So this model is actually completely wrongly constructed. It's a freak.

Anders has been the happy owner of such a monster since 2006. The motorcycle's wheels are too large and weigh too much. The fuel tank is under the seat and the engine is a large, 4-cylinder V4 engine of 1200 cc that the engineers managed to get 145 horsepower from, something that was considered amazing at the time.

- Because of the design, you have to wrestle the bike around corners. Otherwise it will just keep going in a straight line. But nowadays it is a motorcycle for old men, it is considered quite soft, says Anders innocently.

Anyway, he is not content with the freedom of driving along scenic routes. No, Anders prefers drag racing with his little friend. But not only on the usual courses, preferably also on ice.

- Up in Lulea they ploughed up a track. We made our own spiked tires and drag raced against the Finns. It was really pushing it to the limit. In recent years I have also tried setting a speed record on ice in a contest called SpeedWeekend. I suppose it's a slightly unusual thing to do.