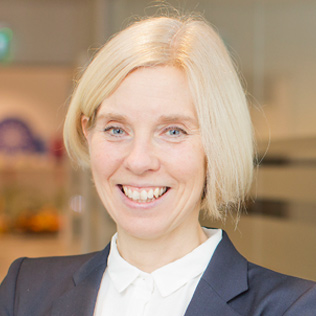 Facts “- At the age of 23 I was Head of programming and it was really exciting!”

Most of us change gradually throughout our life. But not Product Strategist Eva Thelin. She seems to just make the decision and then the transformation happens! She has already reinvented herself once. Now it seems she is about to do it again.

The answer to the first question, Who is Eva Thelin, comes pouring out as if from a machine gun.

- I am structured, analytical, proactive, performance-oriented, a time-fanatic and a perfectionist.

Perhaps she detected an anxious pair of eyes on the other side of the table, because she adds quickly:

- But I am kind, very caring and always worried about not being sufficiently talented, not being good enough.

But this version of Eva Thelin, where she personifies self-confident determination, is version 2.0 of Eva. As a matter of fact, she underwent a radical transformation in 1983 when she began studying computer science at Stockholm University.

- As a child I was very shy, reclusive, alienated and alone. In school I never made a single presentation, I was never there when we had to report in front of the class.

What is interesting is that Eva's transformation did not happen unconsciously over an extended period. It happened deliberately and almost overnight. She left her extreme shyness behind her and instead she released all the resources she had within her. Eva 1.0 upgraded herself to Eva 2.0.

- I decided that now I can be like this, and it was really a revolutionary change. When I meet my old school mates, they hardly recognize me. Between the ages of 3 and 19 I was one person, but then it was time to step out of that role and become the next person. It was really fantastic.

Considered a career in medicine

Originally, Eva wanted to become a pediatrician but she was just short of having enough points. Instead, she applied to study computer science, economics or law. She was accepted for all three, so she drew straws to decide her future.

- But throughout my computer science studies I worked at a nursing home in Bromma. My heart was still in the healthcare profession and my interest in medicine.

Although Eva would not describe her studies as particularly difficult, she did bring some useful programming language and techniques with her into her professional life.

- Not that I use any of them in practice, but they taught me different ways of thinking in different situations. COBOL gave me the opportunity to help out when the old systems are not functioning. Pascal and Simula taught me to think in an object-oriented way.

The attractions of the commercial world

In 1985 Eva was recruited by Entra Data in Stockholm, where she worked with their financial products.

- It was embarrassing at times to say that I was working with financial IT. It was not very fashionable at the time. Besides, I was a consultant and worked with IBM computers, which were considered at university to be a commercial devil. Ideally, one was expected to be a researcher and work with VAX computers for social systems.

Eva began to design the credit card system Entra Card and later she worked on the brokerage system Finesse.

- Finesse stands for Fund-Integrated-Notary-Economy-Control-System, so it really incorporated absolutely everything! At the age of 23 I was Head of programming and it was really exciting. But at the time, I didn't realise that it would be a project spanning 100,000 hours. 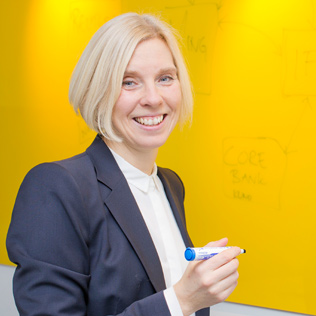 As a programming manager, Eva was responsible for establishing structures for how all the programs would be designed, drawing up standards for how to code, how the database would function, creating initial routines for release management and updates.

- And then I had to get all the other programmers to follow my structures and that worked quite well. But this system is still the largest in Sweden. Now it is owned by Nasdaq OMX and is called Wizer. It is one of the systems that I am now replacing with Crosskey's Capital Markets On Tap. So my circle is closed and that feels a little funny.

The following years for Eva were a whirlwind through Stockholm's financial world. She followed with Finess to OMX and then Bohusbanken, Wasabanken, Länsförsäkringar and SimCorp. In between, she also managed to become the mother of two sons.

The common thread is that she was responsible for designing organizational structures and systems and, in some cases, integrate and adapt them.

In 2008 she landed at Crosskey and she assumed direct responsibility for a major project in 2010 when she was asked if she would be willing to set up the capital markets department.

- Initially, I wasn't interested. I'm not good at managing staff, I'm good at managing projects. I'm good at driving major change processes, We have to do this, we have an hour but we would need ten hours, how do we do it? I am good at that. I'm too driven and a little too frank in some situations to be the optimal personnel manager.

But Eva was persuaded, and soon she was in full swing designing and implementing structures, developing up-skilling programs, system refresher programs, cleaning programs, routine software and, in particular, training employees in how capital markets work.

“- Creating a concept, build it up and seeing it materialize - it is absolutely amazing!"

- In the beginning we were a mixed bunch with low self-confidence, but we managed to change that. They are so incredibly talented!

Mostly, Eva wanted to continue working as a strategist for Crosskey. In 2011, Pekka Virtanen started as the new Head of Capital Markets, but he didn't want to let Eva go, so she became hangaround manager for the department. This suited her perfectly. In fact, she had secretly already started on her own small project.

- I had already in 2010 started to think about the concept that subsequently became Capital Markets On Tap. I persuaded Pekka of the merits of the project and so we worked on the strategy over the following years.

Time for a second transformation?

When Eva is not busy managing projects, she likes to spend time in the stables where her two horses are waiting. From 1993-96 she rode in the national team and to this day she sets very high standards.

- My horses make me dirty, tired, poor and wet - but also very happy. I have high ambitions with respect to my horses and I ride at least 5 times a week.

It is time to round off the interview and Eva sums up:

- I am living my dream. I have the most fun job in the world. I have created a new product in the field that interests me the most. Creating a concept, build it up and seeing it materialize - it is absolutely amazing!

Very beautiful final words. Perhaps somewhat of a cliché, but now it's time to go home. The End.

Then the interview takes an unexpected turn. 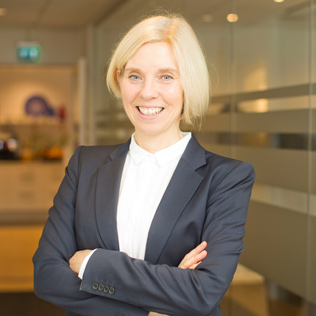 - In fact, this is actually meaningless. I measure financial risks, expected returns and I create structures for securities data, checks for exchange rates and calculations to six decimal places for a fund unit's share price and I make sure it's perfectly right. What I do does not create tangible value for anyone. It doesn't actually help people affected by Ebola or other natural disasters.

- The thought occurs to me sometimes that it's incredibly artificial. Why do I work over 200 hours a month with something that really is so unimportant? Something that is so very far from what I originally wanted to be, namely a paediatrician.

Is this not a classic situation where a successful person wants to tone down their exploits with a pinch of modest self-criticism?

Well, Eva Thelin would probably not be Eva Thelin if she did not have a concrete plan to put on the table - a plan for how she will transform herself into Eva 3.0.

- When I'm finished at Crosskey, I actually plan to start studying at the university. Not to become a doctor, but a healthcare education. I want to use my project management skills in combination with a healthcare education to contribute to helping Doctors Without Borders. Then my sons will be old enough and it will be payback time in life.