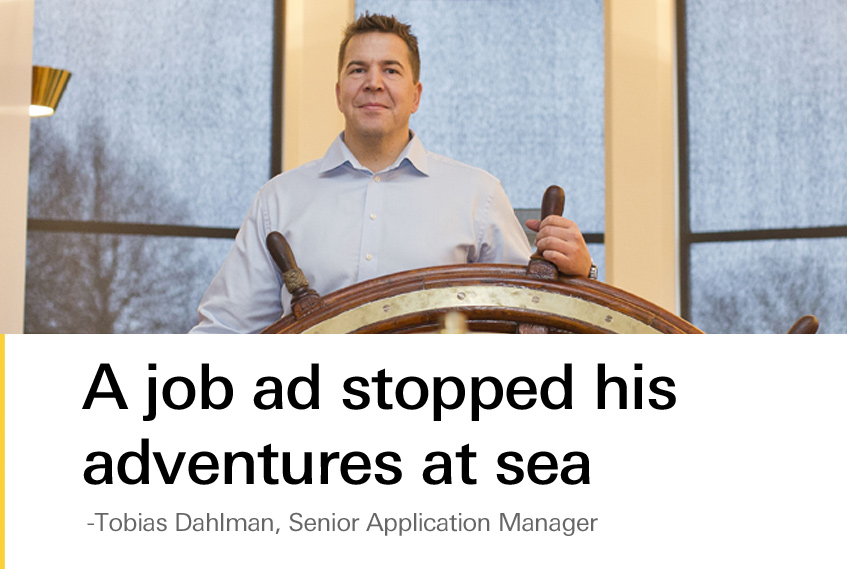 Facts “- Most of what we wanted to build was possible. It was rare for an idea to fail because of technical obstacles; it was more about what was appropriate from a business strategy perspective.”

As a newly qualified engineer, Tobias Dahlman had a wish to go to sea and see the world. That plan never came through. Instead, he became involved in creating the world's best online bank.

Tobias Dahlman's diploma from the Åland University of Applied Sciences stated that he was an Automation Engineer. The year was 1999 and Tobias had a plan: He would sign onto a ship as an electrical technician and travel around the world. But a coincidence put a stop to that plan.

- I saw in the newspaper that Ålandsbanken was looking for system developers and that's how my journey at Crosskey started.

Tobias commenced with an employer who had arrived at an insight. Relationships could not only be digital, they could also be strengthened if the digital services were good enough. For Tobias, that insight meant work, work and even more work.

He was able to prove his worth by being involved in the development of the bank's fund services. After that he was asked whether he wanted to work with the bank's digital business development. That department had a desperate need to be able to work directly with developers.

- It was the first time I worked with colleagues who were not developers and that broadened my horizons.

The team that Tobias worked with consisted of a motley crew with diverse backgrounds, which included everything from economists to journalists. The ambition was clear: to build the world's best online bank.

- It might sound cocky, but actually it wasn't very difficult. Globally, online banks were far behind the Nordic banks and up here in the north, the major banks had huge problems with merging several different systems and databases, says Tobias.

The team in the computer department had a clear advantage: They were a close-knit team who knew the systems inside out.

- Most of what we wanted to build was possible. It was rare for an idea to fail because of technical obstacles; it was more about what was appropriate from a business strategy perspective.

Tobias is not one to brag. He says he is just happy with the online banking the users obtained. 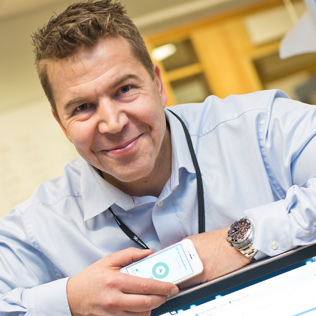 Among the many lessons he learned from the project was the importance of working closely with the customer.

- It sounds like a cliché, but it really is a huge advantage. Literally sitting in the same room as your customer means that you can react quickly. There is no risk of dreaming up something that may be good, but is not what the customer wants.

According to Tobias, major advantages are achieved by mixing different competencies together in development projects. This increases the range of perspectives and thus reduces the risk of unnecessary development work. At the same time, the service concept can be developed quickly.

- If you work with anything for long enough, there is always the risk that you end up in a rut. Working with people who are not technicians helps to keep you alert.

“- Constant change. It's hard to believe that ten years have passed. We have developed enormously. At the same time, we have begun work on new technology platforms and we have many new colleagues.” The bank moves into your pocket

Over the years, the online bank has been one of Tobias' pet projects. It is therefore natural that he is now part of the team that is currently working on the mobile version. Initially, the team worked on a technical interface to deliver information to the mobile application, but now they are working to develop an app.

- Naturally, the limited space in a mobile device imposes high demands on everything, from usability to the underlying technology. A compact area like a mobile display is merciless. It doesn't forgive even the slightest error, but instead emphasizes every flaw, says Tobias.

He doesn't hesitate many seconds when asked to describe Crosskey's first 10 years.

- Constant change. It's hard to believe that ten years have passed. We have developed enormously. At the same time, we have begun work on new technology platforms and we have many new colleagues.

It is an environment that obviously suits Tobias well. He returns repeatedly to the need to learn new things.

- An insight from the past ten years is that there is always more to learn. If someday I would like not to have to learn something new? No, I can't even imagine that option.

But has he ever regretted that he replied to that advert and chose not to go to sea for the big adventure?

– No, never. Simultaneously juggling two little boys at home with a job that requires 100% focus is enough adventure for me.