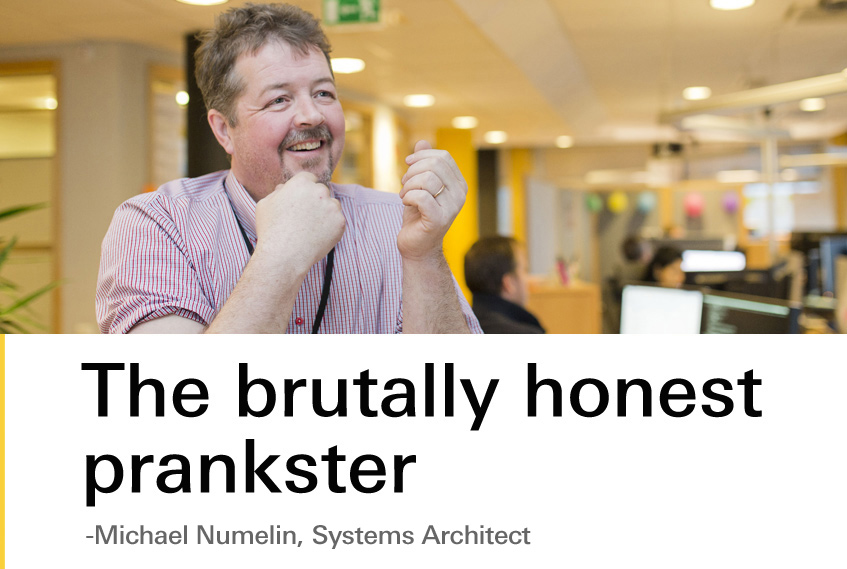 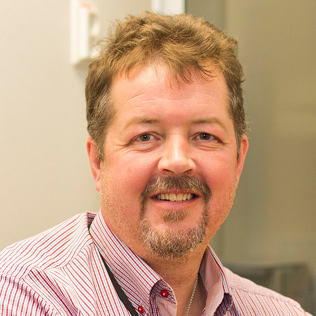 Facts “- We sat together over two very long days and Tommy built the customer interface, while I built the interface to the banking system. Today's internet bank is based on the interface for customer data, accounts, user IDs and code tables. So we must have done something right.”

How much administration is too much? How should internal communications function in the future? Are there still new pranks to play on colleagues? Michael Numelin shamelessly shares his thoughts. Fortunately, after 26 years as a Software Developer and Systems Architect, he still has a twinkle in his eye.

Michael shows a photograph. The picture shows him smiling broadly behind his desk on the day he returned from sick leave. On the table there is an enormous pile of toilet paper. That's exactly the kind of mischief he loves.

- You should have fun at work. In all my years, I can count on the fingers of one hand the number of times I thought it was a struggle to go to work, says Michael.

Naturally, he can count what mischief he himself was involved in planning, from desks and cars wrapped in plastic to his classic joke of hiding computer mouses.

But Michael "Nummi" Numelin is much more than a 51 year old young-at-heart.

He is also a soothsayer ("I'm brutally honest") who is driven by a sincere desire to develop and improve Crosskey. He also has the right perspective. In 1988 he joined Ålandsbanken's computer department and since then he has mostly worked on developing systems that communicate with the outside world.

- During the first years at the bank, a wide range of areas were covered by just a few people. We made connections to the Finnish network of ATMs, received card transactions and we developed the Bank's business solution.

Credit cards to the whole world

When the internet became more prevalent during the 1990s, it was Michael and his colleague Tommy Grönlund who together, over a weekend, coded the basis for the future Internet Bank.

- We sat together over two very long days and Tommy built the customer interface, while I built the interface to the banking system. Today's internet bank is based on the interface for customer data, accounts, user IDs and code tables. So we must have done something right.

Michael appears as something of a paradox, an unsentimental nostalgic. On the one hand, he describes himself as an "Ålandsbanker to his fingertips".

- I've helped to build so much for Ålandsbanken. A part of my heart will always remain with them.

On the other hand, he sees that incorporation was the right measure, and today he is completely focused on Crosskey's card solution. 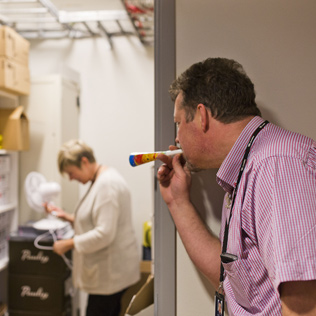 - Our product provides any company with the ability to easily issue credit cards. Furthermore, I see that we offer a solution which, with local adaptations, can work anywhere in the world.

When the conversation moves to Crosskey's challenges, Michael does not hide the fact that he sees two imminent dangers associated with the growth of the company: that internal communication will suffer and that there will be an increasing burden of administration.

- This can be caused simply by the staff being located on different floors. Telephone calls, e-mails and meetings cannot replace spontaneous interactions in the hallways and corridors. A few words can sometimes replace a one-hour meeting.

Nevertheless, he considers that Crosskey's management has tackled the challenge well.

“- Our product provides any company with the ability to easily issue credit cards. Furthermore, I see that we offer a solution which, with local adaptations, can work anywhere in the world.”

- I think that Pitchi (Thomas Lundberg, CEO) has shown patience and his Business Updates every month are a very good way to convey the position of the company. But communication is a very difficult area. There are many opinions and views about how it should be.

Michael can see that as Crosskey has grown, the administrative tasks in the company have grown. Personally he is most disturbed by the fact that talented programmers are choosing new tasks within the company.

- We are losing good people who choose administrative tasks, which could be performed by someone with a different educational background than software developer. Today we have a critical need for Java developers, so we should assign our developers to those tasks instead of administrative tasks. But naturally I understand that people want to evolve and try new challenges. It is quite a dilemma. 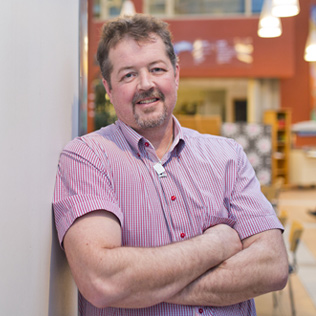 Furthermore, Michael hopes that the level of administration is kept in check.

- Now as we have grown, the administration is today completely different than previously as projects must be scheduled and they must be delivered. Meetings and project management take more time and cost more, since everyone has to have a salary. Of course this is easy to complain about as a developer, but it's about finding the level of administration.

When Michael looks back, he sees years of hard work that the employees have carried out for each other and for the company.

- I hope that this approach is maintained and continues to be a driving force. Some people may see Crosskey simply as a workplace, but I see the company as something more significant, as an important Åland institution that tangibly contributes to the development of society.

For Michael, it is especially important in a growing company that the staff can still have fun.